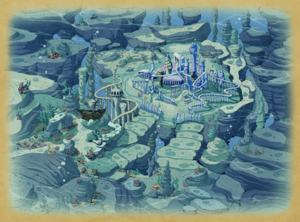 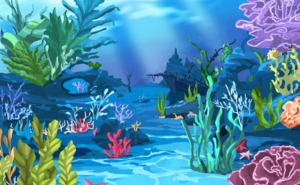 The Coral Sea (珊瑚の海, Sango no Umi) is the location where merfolk live. This location was introduced in Episode 3-11.

The northern parts of the Coral Sea is covered in ice floes during the winter and melts away in the spring.[1]

The Coral Sea has a royal family. The only known member is Prince Rielle, who attended elementary school with the Octavinelle trio.[2]

The Coral Sea has a land boot camp that was established by a mermaid princess a long time ago to help merfolk assimilate to living on land. For a month, merfolk stay at a boarding school to learn how to breathe, walk, and eat food.[3]

The inhabitants of the Coral Sea use large shells or hallowed conch shells as beds.[5]

It is popular for merfolk to swim up to the surface to watch fireworks.[6]

The Atlantica Memorial Museum (アトランティカ記念博物館, Atorantika Kinen Hakubutsukan) contains items related to important figures of the Coral Sea. The museum contains a statue of the Legendary Sea King, who bears a strong resemblance to King Triton. Some of the exhibit items are the Mermaid Princess's golden comb that looks like a fork and a replica of the Sea Witch's cauldron.[7]

Retrieved from "https://twistedwonderland.miraheze.org/w/index.php?title=Coral_Sea&oldid=69576"
Category:
Cookies help us deliver our services. By using our services, you agree to our use of cookies.