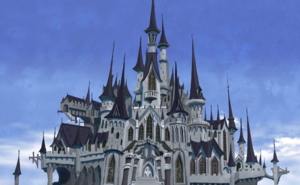 Night Raven College (ナイトレイベンカレッジ, Naito Reiben Karejji) is a prestigious, all-boys academy and the main setting of Twisted Wonderland. It is a four-year magic educational institution located on the Isle of Sages. Dire Crowley is the school's headmaster.

Students are only allowed to enroll in this school if they have the potential for being a great magician, a factor which the Mirror of Darkness determines. A black carriage will be sent to pick up incoming students personally, which can even travel underwater.[1] They are kept unconscious in coffins called "Gates" until arriving at the academy. In most cases, they can only be awoken if their Gate is unlocked with a special key,[2] however there are exceptions.

All students are given a magical pen upon enrollment. These are fountain pens that hold their magic gemstones, are also utilized as wands[3] and can also be used to verify if a student is enrolled in the school.[4] The color of one's gemstone is determined by which dorm they are in.

According to a legend in Twisted Wonderland, there once lived grand beings in this world collectively called the Great Seven. Each of the seven dormitories at Night Raven College are modeled after one of these Great Seven, and upon entering the school, students are sorted into these dorms based on the qualities of their souls. These dorms are:

However, there is a dorm that is not part of the seven main dormitories:

Night Raven College also has a sports rivalry with Royal Sword Academy, another prestigious school for mages that other magically-gifted students (such as Chenya and Neige) attend. For the past 99 years, RSA has beaten NRC at the annual Inter-School Magift Tournament. 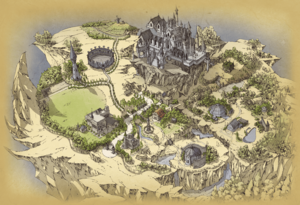 In-game map of the campus

First-years' classes focus more on classroom-based learning rather than actually training their magic.[7] Fourth-years are sent on long-term internships all over the world starting early on in the year; they don't return to campus until the cultural festival in February.[8] Every year, there are always dropouts or students who have to repeat a year - but ever since Riddle became dorm leader, there have been no such cases in Heartslabyul.[9]

All Night Raven College students are required to join a club. There is a club recruitment drive held at the beginning of each school year.[10]

Retrieved from "https://twistedwonderland.miraheze.org/w/index.php?title=Night_Raven_College&oldid=69515"
Category:
Cookies help us deliver our services. By using our services, you agree to our use of cookies.