This article is a stub. You can help Twisted Wonderland Wiki by expanding it.

Scalding Sands (熱砂の国, Nessa no Kuni) is a desert country in the world of Twisted Wonderland that's known for its' tea leaves, spices, and silks.[1]

The Scalding Sands is a large peninsular country where most of its territory faces the ocean. Many high-end streets, housing, resorts, and hotels line the coasts. The majority of the country's territory is covered in deserts. There are also many rivers flowing throughout the country which have since been developed into canals. Its exact location in the world is unknown as of yet.

The Scalding Sands has an arid tropical climate. In the undeveloped desert regions, temperatures in the day and night vary widely, with night temperatures going as low as 0°C. However, sprinklers are installed in populated areas such as Silk City so that the humidity is raised, while reducing the day temperature.

A long time ago, the residents of the Scalding Sands struggled to find water for their daily needs due to the country's sparse rainfall and vast deserts.

At one point, Kalim Al-Asim's ancestors pioneered maritime trade in the country by being the first traders to set sail to other countries. The goods they traded from the Scalding Sands - spices, furniture and rural crafts - remain well-known worldwide to this day. The perilious journey was made without the use of accurate nautical maps and it eventually paid off. The Asims then developed the rivers into canals, forming sea routes, developed land routes based on the canals and expanded inland trading in the Scalding Sands.

There was once a law where royalty could only marry other royalty. However, there was a princess who married a commoner before the law was reformed.[2]

The language spoken by the residents today seem to be the same common language spoken everywhere else. It is not known if the ancient language continues to be taught in schools. However, traditional festivals such as the Yasmina River Fireworks Festival (Al'āb Nārīya) seem to also be known locally by their ancient names, as Kalim introduced it with this name before Jamil explains that it is known contemporarily as the Yasmina River Fireworks Festival.

Tea is customary with every meal; residents have a special brew for guests. While they offer super sweet tea to guests as a symbol of luxury, residents also enjoy tea and it is said that they drink 10 cups of tea a day. This custom of serving sweet tea originated from a time when sugar was valuable, and according to the English localization, was the result of a sugar shortage.[3]

Mancala is a popular board game in Scalding Sands.[4]

Peacock green is a popular color among men and women.[5]

In traditional parades, it's customary to release a rainbow of parrots at the end and then have the host greet the guests.[6] 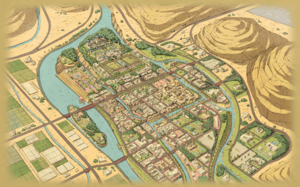 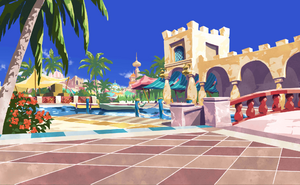 Silk City (絹の街, Kinu no Machi) is a major city in the Scalding Sands which serves as the country's political and economic center, while being a popular tourist destination. It is also physically located in the central region of the Scalding Sands. Traditional architecture which utilises white stone, said to be a material that was more easily accessible than timber for building, is iconic and common in the city. There are many canals that flow through the city, along with sprinklers which serve to cool the daily temperatures. The canals are utilised very frequently as both trading vessels and traditional ferries for both the locals to travel and for tourists to sightsee pass through them.

To develop Silk City to its current state, merchants like the Asims invested heavily in advanced technology so that the city can become a sustainable environment with potable water for its residents. The benefits of this move snowballed in return - more people moved to Silk City because of the availability of water, allowing for more trade to happen, which then allowed the people to grow affluent, which also raised the town's own affluence, and subsequently, the tourism industry prospered after.

Silk City's specialises in trading silk commodities, from which the city's name is derived. It is also known for its fine cuisine and seafood. It imports fresh marine products from the coastal regions of the Scalding Sands daily. 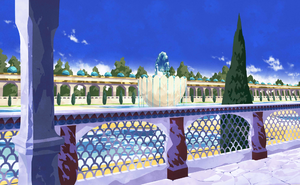 Asim Park (アジーム公園, Ajīmu Kōen) is a private park owned by the Asim family. It is located in Silk City, Scalding Sands. 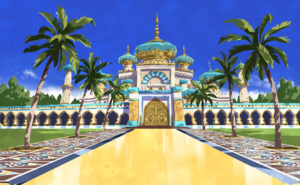 Kalim's Home (カリムの家, Karimu no Ie), also known formally as the Asim Estate (アジーム邸, Ajimu tei) or colloquially as the Asim Palace (アジーム御殿 Ajimu goten), is where the Asim family stays. It is located in Silk City, Scalding Sands. 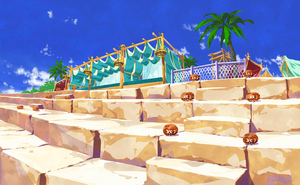 The Fireworks Bleachers (花火の観覧席, Hanabi no Kanranseki) is a location in Silk City, Scalding Sands, where the Yasmina River Fireworks Festival is held. Camel Bazaar (ラクダバザール, Rakuda Bazāru) is located in Silk City of the Scalding Sands. It is a large bazaar where a wide variety of goods is sold. 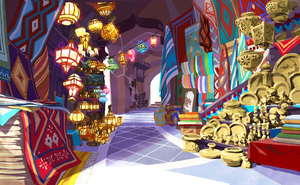 Zahab Market (ザハブ市場, Zahabu Ichiba) is located in Silk City, Scalding Sands. It is a popular tourist destination for shopping, but there are also swindlers and pickpockets lurking amidst the crowds who target the oblivious.

Retrieved from "https://twistedwonderland.miraheze.org/w/index.php?title=Scalding_Sands&oldid=69755"
Category:
Hidden category:
Cookies help us deliver our services. By using our services, you agree to our use of cookies.