"Scary Monsters! ~Screaming Halloween Show~" is a stamp rally event in Twisted Wonderland that commemorates Halloween. It features Deuce Spade, Kalim Al-Asim, Epel Felmier, Idia Shroud, and Malleus Draconia as event cards which can be obtained as players clear the event and its story. Lilia Vanrouge, Jack Howl, Azul Ashengrotto, Jade Leech, Vil Schoenheit, and Cater Diamond were featured in the event's corresponding limited Halloween Summon. Due to the sheer number of cards introduced, it was split into three Pick Up banners that provided rate ups for a corresponding Halloween SR and SSR pair, which were then active at different points in time over the course of the event. During each banner, while the featured SR and SSR pair has a rate up, the other Halloween cards are still available in the summon pool at the normal rate.

It is the longest event in the game thus far, spanning over nearly 1 and a half months. Its event story focuses on the Halloween Week celebrations in Night Raven College with Grim, Yuu, and the other characters. During Halloween Week (consisting of seven days, ending on Halloween Day), the school is open to the public so that they can participate in the Halloween festivities and stamp rally. Over the course of the week, however, some visitors start to cause lots of disturbances in the name of Magicammable glory. Their antics, ranging from littering to destroying lab equipment, rouse the horror and rage of both students and staff. Fearing for the students' safety, Dire Crowley and the rest of the staff decide that the final event of Halloween day, the Halloween Feast, will be cancelled! How will students convince the teachers that the feast can be held safely?

The event story consists of 76 episodes which were split into five main episodes. Each episode was released gradually over the course of the event.

Not to be confused with Scary Monsters! ~Endless Halloween Night~.

How to Play[edit | edit source]

Deuce, Kalim, Idia, Malleus and Epel can be used in battles and lessons during the event period, but Deuce's Personal Story is only available after clearing the 24th episode of Part 1 or after November 26, 2020 16:00 JST (when the event ends). Kalim's, Idia's, Malleus' and Epel's Personal Stories have no wait time, so you can read them after leveling their Episode Level.

Stamp Mission Schedule
Take note that each stamp card is only available for their respective durations. Remember to claim your rewards before they are gone! 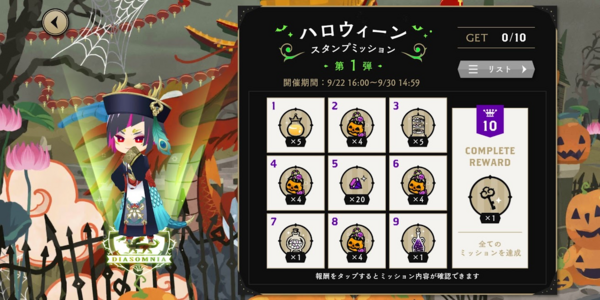 The items were generally more expensive in the rerun than before. A total of 109 Candy Buckets can be obtained, but the shop requires 144 Candy Buckets in total before you can buy out the entire stock, so please spend your Candy Buckets carefully.

Retrieved from "https://twistedwonderland.miraheze.org/w/index.php?title=Scary_Monsters!_~Screaming_Halloween_Show~&oldid=64796"
Categories:
Cookies help us deliver our services. By using our services, you agree to our use of cookies.